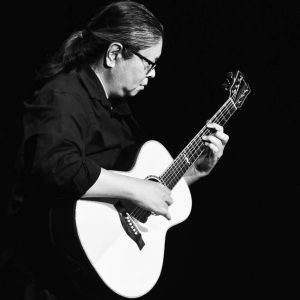 Christian (Bong) Ramilo has worked in community arts and cultural development for more than thirty years. Since coming to Australia in 1986, he has used diverse approaches in working with diverse communities to make and share art.

Bong co-founded several arts organisations particularly among the Filipino and Asian communities in Sydney. He was a member and director of the Community Arts Association of NSW and a co-founder of the NSW Multicultural Arts Alliance.

From 1992 to 1994 Bong worked with Gary Cubillo Lee in Darwin to produce “Keep Him My Heart: A Larrakia-Filipino Love Story”, a major play about Larrakia and Filipino links, told through the story of the Cubillo family of Darwin. He co-founded the Darwin Rondalla to play the music for the play; the Darwin Rondalla continues to perform with members of the Cubilo family. Bong stayed on in Darwin after that project, continuing to work on community arts and multicultural arts projects. He was the Northern Territory’s Multicultural Arts Officer from 1994 to 1996.

In the late 1990s, Bong explored new digital and online technologies for artmaking; he was awarded an Australia Council Fellowship, 2000-2002, to explore new technologies and community cultural development. After his Fellowship, Bong worked as a computer programmer while contributing to the ccd.net, a national community cultural development project, and continued to explore the relevance of digital technologies to CACD. In 2006, Bong was appointed Executive Officer of Brown’s Mart Community Arts and led its reinvention into Darwin Community Arts (DCA), relocating its base from Brown’s Mart in Darwin City to Malak in the northern suburbs. DCA has grown significantly as a grassroots arts development organisation on his watch.

Ros Bower Award 2018, Christian RamiloI “Thank the Australia Council for the Ros Bower Award for 2018. I thank Ros Bower for leading the way; her legacy lives on through this Award. And I thank her son, Steve Warne, for presenting me this Award.”